Night is Alive featured in February 2020 Issue of Downbeat

Kathy Salem, managing director of Night is Alive, opens up about her journey from a small, boutique Jazz agent, to becoming a nation-wide Jazz Powerhouse.

“We started off very small: I was only doing management for jazz musicians,” said Kathy Moses Salem, managing director of Akron, Ohio-based Night Is Alive Productions. “But musicians come to me all the time, asking Can you ‘do this, can you do that?’ We realized that there were bigger needs, and we ought to be 360-degrees.”

But Salem, at 75, is a newcomer to most of these aspects of the music business. And at first, she didn’t even plan on working as an artist manager. Salem’s background includes advertising at the Cleveland Plain-Dealer and lobbying in Washington, D.C. But after her husband passed away in 2004, she decided to channel her energy into a lifelong love of music.

You can read the full article here! 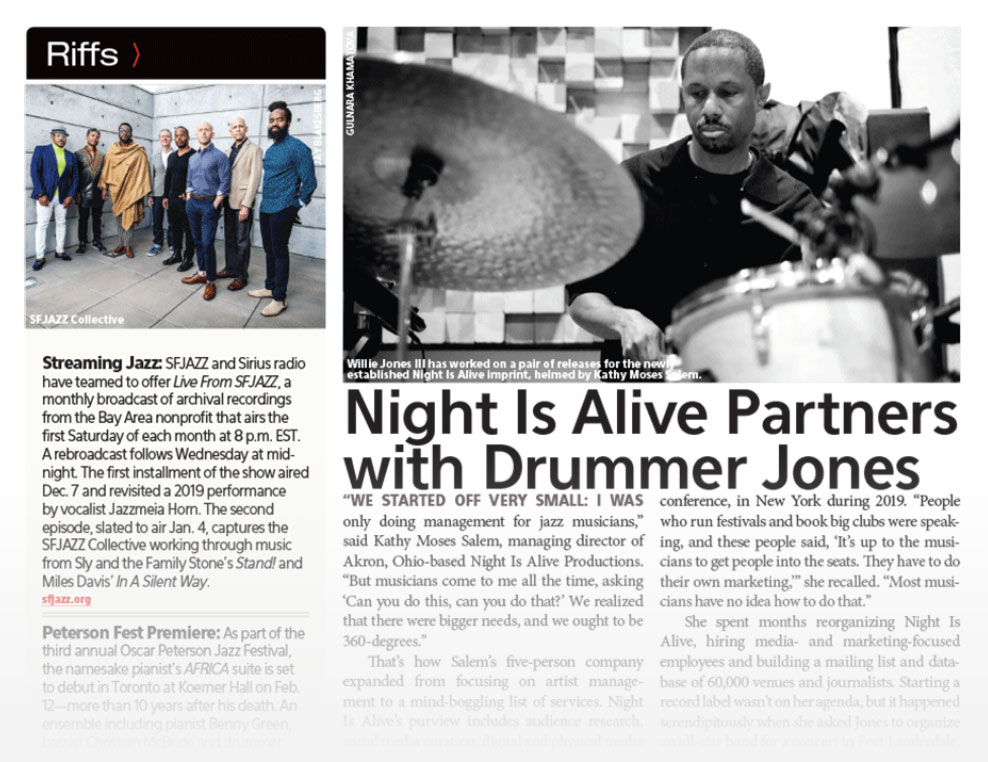 We’ve been having an amazing time at the 2020 Jazz Congress, hosted at the Lincoln Center, here in New York City. We’ve had the chance to listen and speak to so many gifted artists, teachers, mentors, and musicians. What can we say, it feels good to be inspired and to be surrounded by your peers. If you’re here with us, let us know! You can alwaaays drop us a line on our instagram at www.instagram.com/night_is_alive

There are many traditions during the Christmas season that bring the holiday to life: lights and decorations sprinkled around your community, gift wrap and candies piled high in your local store, and, of course, your favorite holiday jazz music.

The holiday season emphasizes peace, love, and joy, but stress and anxiety can sneak uninvited among the celebrations with our families and loved ones. With political tensions, overcrowded terminals, family disputes, gift-giving pressures, and expectations for perfection, we can easily lose sight of what the holidays should be about. To help set positive intentions this season, here is a list of five simple things you can do to keep yourself calm and happy through the busy weeks ahead.

HEY JAZZ LOVER, HERE'S SOME JAZZ YOU MIGHT LOVE!

BUY THE ALBUM
Lovers and Love Songs is a distinguished collaboration written and performed by several of the jazz industry’s top musicians. This collection of heartwarming melodies is the soundtrack to a modern-age love story that swept the web prior to the album’s release. Though you may have forgotten about these iconic tunes before now, they have been brought back to life in a new and inspiring way by Willie Jones III and his All-Stars. Join these world-class artists on a romantic journey through the ages and discover your own personal love story, the music a backdrop to your imagination.
After selling out two concerts in Fort Lauderdale and Fort Myers, FL, Ms. Salem suggested bandleader Willie Jones III and his All-Stars take their performances to the next level and create a studio recording. The group, made of big-name bandleaders in their own right, so thoroughly enjoyed playing together that they agreed, thus leading to the birth of Lovers and Love Songs.

Donny Hathaway’s life was tragically short, but in his 33 years on earth, he was able to leave a sound and feel to his music that is still revered today.  Like many great musicians, Hathaway got his music start in the church. Raised in St Louis and Chicago, he began singing in the choir and studying piano at a very young age.  He would later attend Howard University to further his jazz studies.

Hathaway began working professionally in the music business as a producer, arranger, and a session musician in the early days.  He was a talented pianist and worked with the likes of Aretha Franklin, Jerry Butler, and the Staple Singers before he started his singing career.  Hathaway’s experience working with such talented people set him up for his own success. Hathaway released his first studio album in 1970 titled “Everything Is Everything.”  The album received excellent reviews and put Hathaway in the center of the music scene.

Hathaway had a smooth, gospel-inspired voice.   His strong command of the music resonated with audiences, and he gained in popularity after the release of his first album.  Two years later he would begin a collaboration that would last for a decade with Roberta Flack. The two recorded many times together and released their first duet album in 1972 titled “Roberta Flack & Donny Hathaway.”  The album was a smash hit and was certified Gold. Another collaboration in 1978 titled, “The Closer I Get to You” would go on to be a number one track. Their last compilation was in 1980 with the release of “Roberta Flack Featuring Donny Hathaway” which was also certified Gold.

The tragedy of Hathaway’s story is the difficulty he had working through his mental illness.  He was an incredible musician who had to wrestle with the strain of depression. His depression was enough to require hospitalization for extended periods during his life.  Hathaway ended his own life in 1979. He was only 33 years old. Donny Hathaway’s music still lives on and continues to influence R&B and jazz music today.

A musicians’ life is one of a road warrior. The time it takes to get from show to show
can be a lot more than some musicians bargain for. Traveling from gig to gig
entertaining fans is amazing, but it comes at a price. The price is the travel. Finding the
headspace in all that travel to create and write new music can be daunting. Nashville
musician Ben Danaher seems to have found a formula for success. Behind the wheel
of his 2007 Chevy Express, with over 250,000 miles on it, Ben travels the states
playing his music and using the time on the road to create the songs he sings.

Originally from Huffman, Texas, Ben comes from a musical family and grew up knowing
the road. The open road creates the calm and focus that can bring a great song to life.
For Ben, the 2007 Chevy Express is the best of all worlds. The van is a way to get form
gig to gig, a place to work on music, and can double as a make-shift hotel room when
travel does not allow the luxury. Danaher’s says that the van has taken on a life and
persona of its own. The van has been feature in Danaher’s press, music videos and
social media posts. Having successfully toured in the Chevy for so long, fans recognize
it at shows and pay homage to the van that moves the man.

Drawing on the influences of legendary songwriter/musicians like Guy Clark, Rodney
Crowell, and Townes Van Zandt, Danaher came to the music scene as a songwriter in
his home state of Texas before pulling stakes and moving north to Nashville,
Tennessee. Danaher released his debut album “Still Feel Lucky” in September 2018 to
critical acclaim. “Still Feel Lucky” is being described as a soulful, heartfelt and
memorable country rock album. This is Danaher’s roots and it comes out clearly in the
well constructed songs. Danaher has been featured in Rolling Stone and continues to
sell out shows around the nation.

The unsung heroes of the music world are the thousands of musicians and vans that
are packed up, beat down, and brave the open road to pursue the dream. Ben Danaher
shows no signs of wear or tear but admittedly the van does have a few blemishes. Visit
www.bendanaher.com to see tour dates and locations and Ben’s newest videos.

Fall is here and you know what that means—Christmas is coming soon.

Now if you love the holiday, that’s great! Why? Because you’ll probably enjoy it when your favorite stores start blasting the Christmas carols you love in November. Oh yes. For you, this definitely is the most wonderful time of the year. As for all of the retail workers out there, we wish you the best of luck since you might have to listen to all of that holiday cheer for two months straight! Hang in there, and thanks in advance for your service.

Whether you love them or hate them, Christmas songs aren’t going away any time soon. That’s been made evident by folks who listen to their holiday playlists year round. (We all know a couple of folks who do.)

According to Wikipedia, Christmas music originated during the 4th century in Rome. By the 13th century, under the influence of Francis of Assisi, the tradition of popular Christmas songs in regional native languages developed. Christmas carols in the English language first appeared in a 1426 work of John Awdlay, an English chaplain, who lists twenty five “caroles of Cristemas”, probably sung by groups of ‘wassailers’ who would travel from house to house. The 16th century gave birth to a few Christmas carols that we still sing today. Songs like “The 12 Days of Christmas”, “God Rest You Merry, Gentlemen”, and “O Christmas Tree”.

The 1930s gave us a stream of non-religious Christmas songs. They included christmas songs for children like “Santa Claus Is Comin’ to Town” and “Rudolph the Red-Nosed Reindeer”, as well as sentimental ballads such as “Have Yourself a Merry Little Christmas” and “White Christmas” which remains the best-selling single of all time as of 2018.

For instance, Night is Alive is offering three unique flavors of christmas music. With “A Very Saxy Christmas”, your guests can enjoy the smooth sounds of saxophonist, Jeff Rupert and a guest vocalist. You can get the season in full swing with “Christmas Jazz” from dynamic jazz drummer, Willie Jones III and his WJ3 All-Stars. Or jazz pianist and Grammy Award-winning arranger, Bill Cunliffe can tickle the ivories during “That Time of the Year” for you and your guests. These are just a few examples of performers who are available for your holiday gatherings. Visit Gig Monster to book Night is Alive artists or other independent performers for Christmas.