Who is really buying music?  Where the money comes from now.

The music industry has gone through some monumental changes in the past 20 years.  What was once driven by consumer purchases has now become a subscription-based model that eliminates the need for physical record stores.  For the vast majority of the modern music industry, selling records was the main business focus.  While some fans still prefer to purchase a hardcopy, the popularity of Spotify, Amazon Music, Apple Music, and Pandora have opened up a new way to access artists’ material.  This computerized marketplace has begun a new debate within the music industry: how will artists get paid in the world of the digital download, and where does the money come from?

Without a doubt, the way most big acts make their money is touring.  Many artists are under the impression that when signing with a record label they will see profits once their album is live.  While a record label can legitimize an artist and help them launch their career, labels expect to be paid back for the money they put up for the new artist.  Even as the album begins to pick up steam and sell, the label is paid first. For example, the Black Eyed Peas didn’t see a big paycheck until their second hit album.  Touring is different. The artists are paid for the shows they do. The more shows they do, the more they make. U2 is one of the most successful bands, and it all comes from the groups’ dedication to hit the road and tour.  A recent Citigroup report stated that of the $43 billion in revenue the music industry produced in 2017, only 12% when to the artist. Of that 12%, touring was by far the most significant profit center for musicians. While streaming services are increasing in popularity, these earnings are not enough alone.  Album and soundtrack licensing sales usually come in second with streaming services, publishing, and merchandise sold at concerts following in that order.

Streaming through a music service has in many ways replaced the era of purchasing a record or CD.  Each of these streaming services, Pandora, Apple Music or the largest of the services Spotify, all have different pay scales.  For streaming services, it’s all about the number of requests for a particular song or artist. This is where a new artist will find it difficult to break in.  Many up and coming artists are not going to have enough requests on the platform to see any real money. Many streaming services do not count a song until it has reached 1000 requests.  These services benefit famous artist disproportionally from a new artist.

While there are still many methods for musicians to make a living, social media and the new marketing trends are leading the way.  Instagram, Facebook, and the 24/7 information cycle require musicians that want to reach the top to have a complete package to get there.

Jazz on the Mind 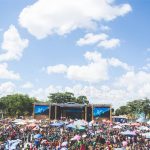